Hi everyone, I hope you are doing well.

This is intended to be an email for my friends who wish to keep track of what’s happening to me as well as a blog post documenting my journey into Theravada Buddhism.

I have been away for almost a month now, so what has happened?

I flew from Marseille, France to Kuala Lumpur on May 4th (I would rather name it Star Peace day) with a 9h layover in Istanbul. Factoring in a bad surprise with Malaysian immigration on arrival, I calculated it took about 35h between the moment I left home and the moment I checked into my hotel in KL.

I was greeted soon after with an H. Pylori infection that kept me up almost one entire night and I got to experience the dysfunctions of for-profit healthcare to get it sorted but I have now recovered.
So I finally reached my destination, Nandaka Vihara (Bukit Mertajam) on May 9th. From there on everything went much smoother.

I got to experience the polar opposite of for-profit healthcare in the form of a « Wellness Center ». The people there are very friendly, very helpful and very « chill ». The man in charge will perform iridology on you. It basically consists in taking a close picture of your eye and then examining patterns and colors in your iris with the help of a grid informed by Chinese medicine, and it’s incredibly accurate. The man told me my upper lungs were dirty (I had been smoking for a couple of years) and he claimed to be able to figure out if someone has cancer. Then there’s these incredible machines.

The first is a small black box made in Germany that, as far as I understood, enables you to electrocute yourself between a needle you place usually on your hand and your left ear where you tuck a sort of receptor. You then use the charts provided by Chinese medicine to spot the acupuncture points on your hand which are linked to the organs you wish to strengthen. You can feel where the acupuncture point is because the mild pain you experience will be strongest right on it. After some time, the pain decreases and you can choose to increase the voltage if you so desire. Believe me or not, it’s very refreshing afterwards. It apparently eliminates blockages in your meridians. At some point the owner asks me if there is anywhere in my body where I have pain. I said I regularly have some in the lower back. He asked me to show exactly where and then put the electric needle on it. I went for a 5 minutes cycle where I progressively increased the voltage to the maximum (still very much bearable if done incrementally) after which all pain in my back was simply gone!

Then there’s another self electrocution machine made in China that will send electricity between the soles of your feet and two patches you can choose to put anywhere (I chose the back). This one removed the pain I was starting to get in my knees.

The last machine is called « negative ion » something and is Japanese. You sit in a bamboo chair that’s electrically isolated from the ground. If someone standing next to you touches you after you place your feet on the machine, it produces a small spark. As I understood it, the machine is electrically charged, which allows your body to reverse some biochemical reactions that it wouldn’t be able to reverse otherwise, making you younger in the process. Owners even claim that long uses of this machine can cure even advance states of cancer without resorting to chemotherapy.

I discovered this place because it is frequented by many lay members (calling themselves devotees) of Nandaka Vihara. 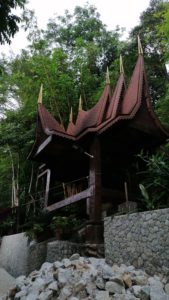 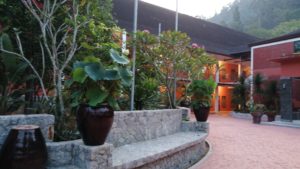 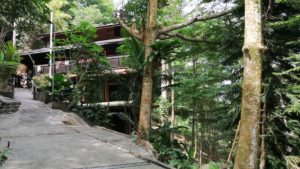 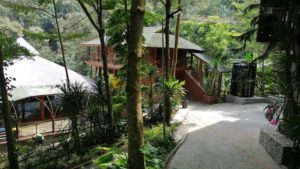 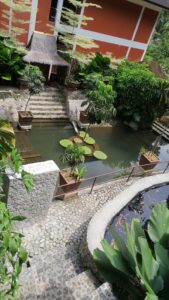 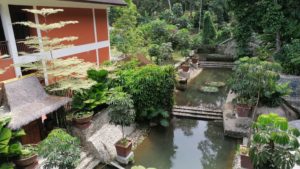 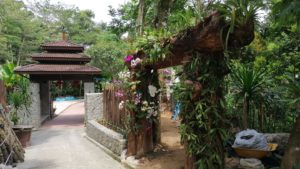 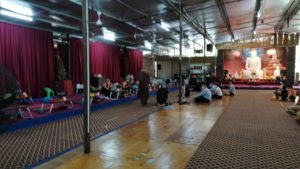 So Nandaka is a place where you will find Theravada monks (actually « monk » isn’t the most accurate word : they are called bhikkhus, which in a very ancient vernacular language of Northern India, Pali language, means « beggar », as Theravada monks eat only the food that is offered to them by the people). You will also find here « Sayalays », which, as far as I can tell, is a Burmese word to describe women who also take the vows of celibacy and live without using money. There are also lay « yogis » like myself who are here essentially to practice meditation in a peaceful and conducive environment.

I have to say that the place is very well designed in that regard. It almost looks more like a spa than a Buddhist monastery. When you are a yogi here, you are allocated a kuti (place to stay) and are fed twice a day (no dinner). In exchange, you agree to follow the rules, of which there aren’t that many (phone use only one day per week though). I will try to post a picture of the time table, but basically there’s two « group sittings » when you are supposed to be in the meditation hall (the evening group sitting isn’t actually on the schedule), and two about half-hour Buddhist chanting sessions. Most of the day, you are free to do as you please, although you are supposed to do Buddhist meditation. 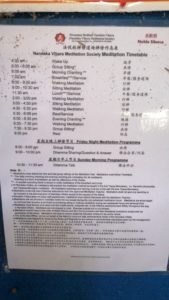 Speaking of meditation, this is in short what I am here for and why I decided to embark on this Buddhist journey. If you want more details, there’s a Buddhist text you can check out that seeks to answer an ancient king’s question: « what are the benefits of the (Buddhist) monk’s life which are visible here-and-now? »
https://www.accesstoinsight.org/tipitaka/dn/dn.02.0.than.html
(You may want to skip the introduction to get to the answer quicker as the text is pretty long).

This is basically a sketch of the practices to which Buddhist monastics dedicate their time. So here I am going to take advantage of the fact that I am still a layman because what I am about to do will be forbidden to me later once I become a monk, since monks are not allowed to say which attainments they have reached to the common folks (to avoid false claims etc.). By this, I don’t mean to brag, I simply would like to explain that I am not going in blindly, that I do have a taste of what awaits further down this path and I simply want more of it.

So the claim is this : I believe that I sometimes reach the first stage of absorption, where the mind feels some kind of subtle and uplifting joy, which translates into a subtle pleasure that runs throughout the body and makes it feel like cotton. It’s like being on a small cloud above mundane reality. On at least one occasion I have even experienced the cessation of thought, where the above mentioned pleasure becomes so intense that the mind is fully satisfied by the present experience and doesn’t want to be disturbed by any thoughts. I still have much progress to do because I still can’t control how long I remain in that state, due to a failed experience with ayahuasca in the jungles of the Amazon in 2006 (if you ever take ayahuasca, make sure they are fully capable of accompanying and protecting you when you lose control of the experience).

These meditative experiences provide you with a pleasure so refined that it doesn’t compare to any sensual pleasure you have ever experienced in your life. This is why it’s so powerful and why it drives people to become Buddhist monastics.

Because if you keep reading the text I linked to earlier, these mental absorptions are said to be the key to unlock amazing potentials of the human mind, accessible only to people who have decided to remain fully celibate. Among those are recollection of past lives, mind reading and other things that would be considered « miracles » but which are taught here like a science. Of course mastering these is not the ultimate goal, which is the famous nirvana, the absolute end to all unsatisfactions.

I have once read about this analogy, which I might call the analogy of the map. It’s as if someone gave you a treasure map of the Caribbean and you sailed your boat to the nearest spot on the map marked « treasure », using the advice written on the map to avoid dangers (which you do find actually exist where they are said to be and the method prescribed on the map to avoid them works perfectly well) and to avoid getting lost. You have successfully reached there and you have found the first treasure. Now you look at the rest of the map, which promises you far greater treasures and you can’t wait to go back sailing on the sea to check them out. That’s pretty much the mental space in which I am at the moment.

That being said, not everything is honky dory and the sailing can get pretty rough sometimes, but it’s well worth the adventure in my opinion.

So every day I spend most of my day in meditation, either sailing towards my mental treasure island or counting my gold coins (or both at the same time) as the case may be.

I have requested to become a samanera, which is like a monk-lite status, and that is supposed to happen over the next weekend. I will be visually indistinguishable from a monk but I will have far less rules to follow. That will enable the small monk community here to assess my fitness for the next big leap into full monkhood, which I hope will happen sometime during the month of June.

Until then I hope you will fare wonderfully.